A downloadable game for Windows

This is a test drive of the LÖVE framework that I went a bit overboard with. Collect the seven foodstuffs scattered throughout the maze-like game world. Once all are in your possession, return to your den to prep for hibernation!

Arrow Keys, WASD: Walk, jump, climb, activate machines.
Z, X, C, Space: Alternate jump buttons
R: Restart from the last checkpoint.
Tab: Display the automap. All visited screens will be shown, and all food locations will also be indicated.
F2: Return to the title screen (restarts the application)
1-9: Select save slot
F5: Save to current slot
F8: Load from current slot
Escape: Open the options menu. Use up/down or W/S to select an option, left/right or A/D to adjust a numeric parameter, and Enter to toggle an On-or-Off parameter. Press Escape to leave the menu.

The first enumerated gamepad on your system can also be used for input.

In order to progress, you'll need to pick up coins to activate moving platforms, and also increase your jump strength by collecting new sneakers, just as in nature.

Checkpoints are represented as torches. When defeated by the bad things, you will be returned to the last torch with all progress since then undone. You can touch the same torch twice to update the restore point with new stats.

Occasionally, you will have to deal with swimming. You float upwards to the surface, and the only way to move further downwards underwater is to have jumped in from a sufficiently high point. To leave water, hold the jump button to continuously hop out. It's not possible to drown in this game.

Screen Scale: Magnifies the screen. Lower is smaller.
Time Scale: Changes the speed of gameplay. Lower is faster.
Vsync: When enabled, synchronizes draw updates to the refresh rate of your monitor or television. When disabled, the game renders at a rate as fast as your system and LÖVE will allow, which may cause screen tearing artifacts.
Up to Jump: When enabled, pressing the up direction (up arrow, 'W', or up with the gamepad analog stick or d-pad / hat) will make the player jump. This was the original behaviour in version 1, but it isn't preferable for everyone, and is especially troublesome when playing with a gamepad.
Remap Gamepad...: Takes you to a gamepad configuration screen to map the following actions: Jump / Confirm, Menu / Cancel, Automap, Respawn, Save Game and Load Game.

In general: your system needs to support LÖVE 11.2 to play this game. A 32-bit Windows package (using the 11.3 preview build) is provided below, as well as the .love project file which can be used with the Linux and MacOS versions of LÖVE. Unfortunately, I do not currently have access to a MacOS system for testing and packaging a standalone Mac release. I intend to resolve this at some point in the future, and also intend to make a Linux AppImage or similar all-in-one package as well.

I tested the Windows package on an old HTPC with an AMD A6-6400K running Windows 10, and experienced substantial frame drops while Vsync was enabled. Disabling Vsync seemed to clear up most issues.

Keyboard key rebinding and fullscreen are conspicuously absent. I apologize for any issues this causes. If there is demand, I can try and patch them in. Given these absences, I'm leaving the Itch project status for this as 'Prototype.' I will be refactoring the core and adding these things in for future projects as my next action.

3 Sept 2019: Serialization bug: sometimes the jump powerup state is not correctly stored and retrieved from a saved game.

Changelog (Summary -- see download for more info)
v1.03a - 21 Jul 2019 - Fixed an intermittent problem with the ending sequence, where the ending art appears dimmed, or doesn't appear at all. Config and save files should be compatible with v1.03. I also packed a screenshot map of the maze into the downloads as a bonus.
v1.03 - 29 Apr 2019 - Converted some actors to map terrain, this may improve performance on slower systems; Implemented saving and loading to/from disk using Binser; Bumped LÖVE Windows executable up to the 11.3 32-bit preview build; Include lovec.exe console executable in the Windows package; Removed mud terrain / actors due to being vestigial; Amplified audio files; Minor graphical fixes
v1.02 - 14 Apr 2019 - Rudimentary gamepad support; Attempts to save and load configuration on close and startup respectively; Dedicated jump buttons (space / z / x / c) added; Lowered percussion in the BGM mix to be less annoying, and mixed music tracks down to single-channel as they are mono anyways.
v1.01 - 8 Apr 2019 - Fix "S" not working to activate machines. Thanks Broccoli!
v1.00 - 8 - Apr 2019 - Initial Release

I'd consider another collab, sure. There's a ridiculous amount of good games to dig through in the current jam. Just wrapping my project up for now but will definitely keep you both in the loop.

Wow, super solid! I'm a big fan of your work, rabbitboots. Nice aesthetic and level design. Keeping this in my personal collection.

Thanks! It was a lot of fun putting this together.

Good work with the pseudo-scrolling in Smiley World! It's giving me Mr. Malibus vibes.

Mr. Malibus? Not for nothing, but that ZZT gif you made actually inspired the world map!

Haha, I see it now! Glad to hear that the GIF of ZZT has been of assistance.

Here's a vid of the first few minutes of Mr. Malibus:

Oh wow, thanks for the video! Never heard of this one. I like the art style... I'm pretty sure this game is based on that same scrolling technique found here on Silky's in 1997. I personally never released anything using it but my very first game was published alongside it. (I won't say which one! lol) but do check out that page. There's a treasure trove of oldies there if you're into that sort of thing.

My current game is done from scratch and I just finished debugging the collision detection for the bricks. Man, those things were a bugger. I think it's safe to say, the engine is complete. But if you can find anything or have any suggestions, I'd love to get your feedback.

P.S. You don't know where I can snag a copy, do you? This is uber obscure.

No problem, try the download link at the end of this article: https://www.create-games.com/newspage.asp?id=4024

At some point this version was re-exported in Multimedia Fusion, so it likely won't work in the KNP editor, unfortunately.

Reply
View more in thread
Far Away Times254 days ago(+1)

I totally loved this!! Super-smooth play experience, finished in about a half-hour. The pacing and world structure is really smart, and I love all the little extra  touches sprinkled throughout (like how the coin collection sound alternates between four distinct notes, so when you get a bunch of 'em it makes a little song).

The whole thing gives me nice Ufouria feelings. Thanks so much for making and sharing it!

This is fabulous! I love how dense the levels are and some of the platforming challenges are really ingenious.

It crashed (or at least surprise quit) on me for no apparent reason just as I was nearing 40 coins. I will be back to play more after saving works!

Oh thanks! Sorry that it crashed, I will look at adding save/load to disk, and maybe bump the LÖVE executable up to the 11.3.

I have some diagnostics questions if you don't mind:

* Do you recall which area you were in and what was happening when it crashed? Did the screen turn baby-blue and display a LÖVE error message, or did it just crash straight-to-desktop?

* Can I confirm your OS and if were you playing with a gamepad or just the keyboard?

Reply
whatnot278 days ago

No problem! I was playing 1.02 on Windows 10. Was playing with a gamepad. I can't remember exactly which room I was in, but I *think* it is whichever room is directly  to the left of the crumbling block puzzle where there are four coins inside a square of red crumbling blocks.

Current status: I haven't been able to dupe the application close under Windows. I'm aiming to have the following completed by Monday evening:

* Add save state / load state functionality
* Bump the EXE up to the LÖVE 11.3 preview build for Windows
* Include a Windows build with console output, just in case whatever is causing the app to close is also generating an error message
* Maybe increase the volume of the sound and music files, as they seem way too low compared to the built-in sounds on Windows

I've uploaded a new version with these changes. Keys 1 to 9 will select a save slot, F5 will save to that slot, and F8 will load. Additionally, save/load can be mapped to gamepad buttons, and the current slot can be chosen from the pause menu.

I recommend running "hibernator_console.exe" from the command prompt, just in case one of LÖVE's subsystems gives any kind of error message in the event of another application close. (Warning: If you double-click on the exe instead of going through cmd, the console will close when the game closes, taking any messages with it.) Additionally, it might be a good idea to change your save slot every 15-20 minutes just to ensure that the save isn't corrupted somehow. 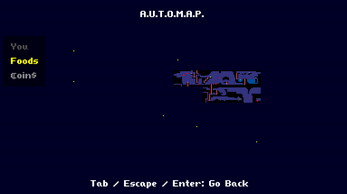 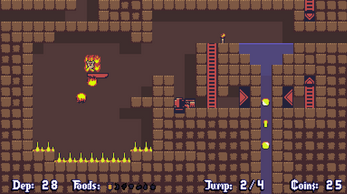 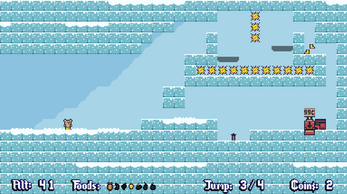 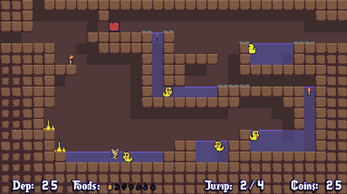